Listen to an audio version of this press release

WRN makes critical DNA-repair pathway choices between classical and alternative NHEJs. In addition to its key role in NHEJ, WRN has been suggested to also participate in HR. However, how it regulates the pathway choice between NHEJ and HR was still unclear.

“In a recent paper, we showed that CDK2 phosphorylating WRN on serine residue 426 is critical for WRN to make its DNA double strand break (DSB) repair pathway choice between NHEJ and HR [4].”

Abnormal DSB recruitment, altered interaction with RPA, strand annealing activity, and DSB repair activities were observed when cells were forced to express WRN engineered to mimic the unphosphorylated or phosphorylation state at serine 426.

“These findings along with the previous discovered role in NHEJ pathway choice, move our understandings one step closer to the true nature of genomic instability that lies within WS.”

Interestingly, another RECQL family member, RECQL4 has also been identified as one of the crucial decision makers during DSB repair pathway choice. A graphic representation of RecQs in DSB pathway choice is shown in Figure 1. 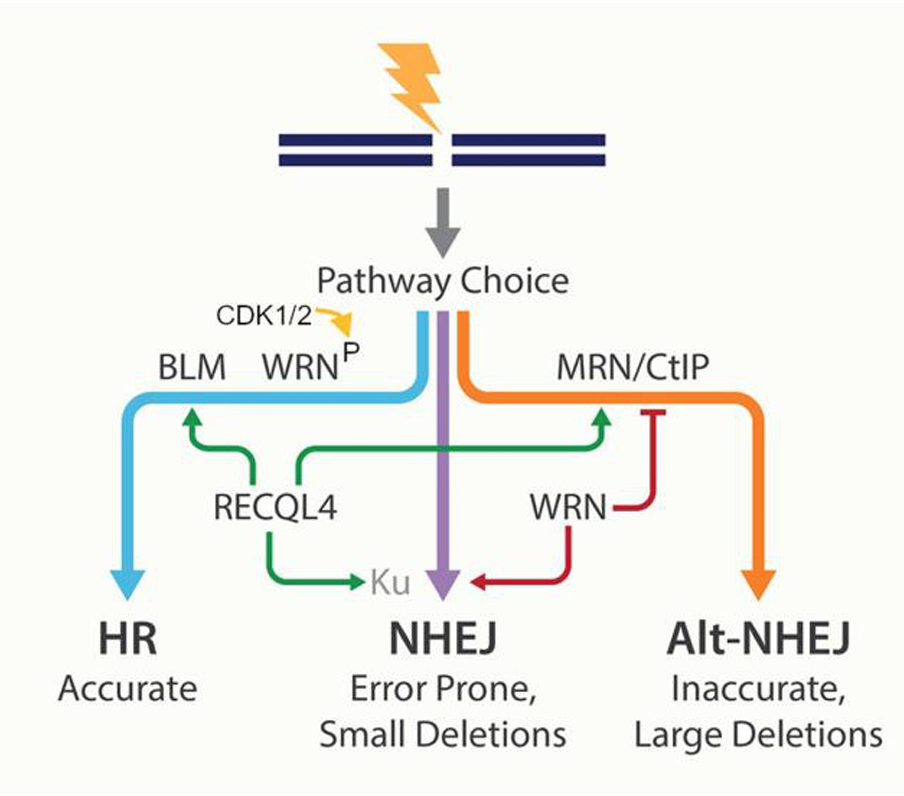 “It is thus conceivable that investigating the cooperative roles of WRN and RECQL4 in DSB pathway choice should be a future goal for DNA repair and aging research.”

Sign up for free Altmetric alerts about this article:  https://aging.altmetric.com/details/email_updates?id=10.18632%2Faging.204120

Launched in 2009, Aging-US publishes papers of general interest and biological significance in all fields of aging research as well as topics beyond traditional gerontology, including, but not limited to, cellular and molecular biology, human age-related diseases, pathology in model organisms, cancer, signal transduction pathways (e.g., p53, sirtuins, and PI-3K/AKT/mTOR among others), and approaches to modulating these signaling pathways.

To learn more about Aging-US, please visit http://www.Aging-US.com or connect with @AgingJrnl